Some Strategies for Controlling Scorpions 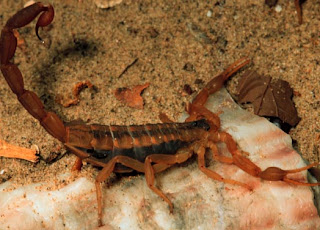 Although many people who live outside the arid southwest may never see a live scorpion, its shape is well known, and they can be found as far north as . The scorpion's body form is characteristic, cephalothorax (fused head and thorax) elongate and dorsally shield-like, with an abdomen distinctly segmented with the last 5 segments tail-like ending in a stinger usually curved upward. The most common scorpion is the small, striped scorpion, Centruroides vittatus (Say) family Buthidae.

This small arachnid is only about 1½ inch long, tan, with two broad dark stripes running lengthwise down the body. It is distributed across the southern states and can be commonly found under rocks on south hill slopes in , and . Non-fatal, poisonous species occur in and in the semi-arid Southwest.

Two species are known to cause fatalities when they sting: Centruroides gertschi (Stahnke) and C. sculpturatus () commonly called the Deadly Sculptured Scorpion or Bark Scorpion. These scorpions are from the family Buthidae are found in southern and neighboring states of , , and . Actually C. gertschi is only a color variation of C. sculpturatus. There are about 40 species of scorpions in the - all of which can sting! Scorpions are most common in rural areas and new subdivisions.

Scorpions are nocturnal. They hide under boards, rocks, rubbish and litter during the day. Scorpions are nocturnal feeders, so they forage at night, detecting slight air movements and/or minute vibrations, seeking insects, and sometimes, small mice. They can normally withstand starvation for 4 - 5 months. Scorpions blindly grab their prey with front, crab-like claws and quickly and repeatedly sting, whipping the stinger over their back. Scorpions can not see ultraviolet light, but ultraviolet light makes scorpions fluoresce - so, go out at night with a black light and carefully hunt this pest.

Despite the scorpion's usual occurrence in dry climates, scorpions need access to water, or some moisture. Because they do need to drink water, their nocturnal feeding habits and tendencies to inhabit shady crevices and areas reduce the evaporation or loss of their body fluids. The crevices they hide in may be extended down to the moist areas of the soil.

Scorpions also find daytime hiding places in crawl spaces, attics and closets. They enter occupied rooms, especially kitchens looking for water. Scorpions avoid temperatures over 100o F. and when the attic gets too hot they move downward into the laundry, bathrooms and/or kitchen where water is available. So, make some water traps.

Inspection - Thoroughly soak an area near the foundation with water . Then cover with a piece of OSB board, plywood, paneling or heavy cardboard with a rock on top - check this "shelter" for several days for scorpions hiding under there and remove them or make a trap of soapy water in a shallow tray under the cover. Conduct a nighttime flashlight (or better still a black light they glow a fluorescent green color) inspection. Place hands carefully when searching in scorpion habitats. Wear high boots, heavy gloves and long sleeved shirts and then:

· Carefully, look under outside harborage and in crawl spaces and attics with a black light at night.

· Scorpions avoid temperatures over 100o F. and when the attic gets too hot - they simply move downstairs into the laundry, bathroom and/or kitchen areas where moisture is also available.

· Scorpions fluoresce under ultraviolet or black light; (they can not jump) so control is relatively easy.

· Ground scorpions frequently burrow into sandboxes where they can remain without food and water for up to 6 months - you may have to screen the sand to protect the kids.

· Scorpions tend to lie still and blend into their surroundings.

· Shake and examine all clothing and shoes before putting them on.

· Move furniture and beds away from the walls.

· Don't walk in bare feet. Always wear shoes when outdoors, especially around a pool at night or when ever in damp areas.

· Be especially careful of wet/damp towels in the bathroom and pool area.

Maintain an 18" vegetative free band around the perimeter of the building. Tighten weather-strip and/or caulk all points of entry. They usually enter by way of wall voids, so seal all visible openings. Store firewood, lumber, and garbage up off the ground.

· Remove harborage, e.g., piles of wood, debris and/or trash around buildings and homes. Repair plumbing leaks and ventilate moist areas. Install screened vents or fans and/or a dehumidifier and/or a non-leaking air conditioner. Insects are their principle food, so control the insects and you control the scorpions.

· Put crib legs in clean wide-mouthed jars, pull beds away from walls, shake all clothing before putting it on - remember, scorpions tend to cling to loose objects.

· Dampen a burlap bag or piece of heavy, coarse cloth and spread it on the ground in the evening. Scorpions will crawl under it during the night and can be easily collected the next morning.

· Use a black light and vacuum dry crawl spaces and attics, as a last resort have caring certified applicators dust under kitchen sinks and in closets where scorpions are seen with desiccating dusts, e.g., food-grade DE, Foam/seal/caulk all cracks and crevices and/or voids.

· Chickens will search out and destroy this pest outside. Now, the Mexican government even puts ads on TV advocating chicken control.

· Cats usually of little value in mice control can be quite effective in controlling scorpions, but they must be trained how to do so safely!

· Water baits with boric acid, borax, food-grade DE or sodium borate or water/soap traps placed where scorpions can reach them but children, pets and wildlife cannot will work.

· No commercial baits are available, but you can experiment with the above-mentioned materials.

· In dry places, scorpions will congregate under moist burlap placed on the ground in areas of suspected activity. Carefully inspect and control the moisture seekers.

PUBLIC HEALTH IMPORTANCE - Caution: Every scorpion sting should be considered dangerous. Always consult a medical professional. Children, chemically-sensitive people, people with heart problems and/or elderly people are especially susceptible to the scorpion's poison. Call a doctor or emergency room immediately and cover with ice or immerse the bitten area in ice cold water. Scorpions sting when touched, rolled over on when sleeping, stepped on, or otherwise provoked.

Remember that your initial inspection must be done very thoroughly. Some scorpions can live for 6 months without food or water and can hide for months after eating their fill. Carefully look all over - very thoroughly. Scorpions usually breed outside or under the building, possibly in the attic, but in most cases will be found in the crawl space, under logs, timbers, rocks, debris, or similar material. Thoroughly clean and caulk the entire building area so there will be no hiding places left for the scorpions. Thoroughly inspect at least an area for ten feet around the outside of the building and remove all debris, boards, rocks, firewood, etc. If you prepare boric acid or sodium borate water baits and they evaporate - simply add more water to the container - the boron products will still be there waiting to go back into the solution. Do not add any more boron to the bait container unless you first wash it. Chickens love to search out and destroy scorpions.

Inside the building, remember scorpions can and do hide anywhere, so carefully look everywhere in bathtub traps, in seldom worn shoes and boots, in areas under appliances, under sinks, in closets, and in similar dark or damp hiding places. All of these areas can be vacuumed and/or spot treated with lime, talcum powder or medicated body powder or Comet®, boric acid, silica gels and/or diatomaceous earth for effective control. Be sure to correct all leaks, routinely and thoroughly vacuum and clean the premises, use dehumidifiers apply silica gels, boric acid, Comet®, lime, talcum powder or medicated body powder lightly in all cracks and crevices, then caulk with silicone all openings. If you must use poison, follow the labeled product directions exactly and vacate the building for at least several days and thoroughly air out before re-entry.

Final Note: Use a black light inside and out. Chickens love to eat them let - let 3 to 4 chickens clean the exterior area for you for real innard-grated pest management. Food grade DE dust will kill scorpions when directly contacted. Remember, if you live in an infested area, put bed legs in wide mouth jars as scorpions can not climb on clean glass. Beds should not touch walls. Wrap bed legs with duct tape (sticky-side up) and place duct tape (sticky-side up) around walls and where you see scorpions. Do not walk without shoes or at least sandals. Look underneath all objects you pick up and take out: clothes, bedding, foot wear before getting into them. Turn on lights when getting out of bed and watch where you step and touch.